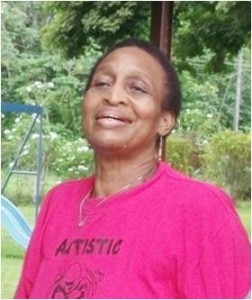 The first time we met Edith and Jervan was at a meeting in the Grant Memorial Presbyterian School, Jervan was jumping around and full of energy. We could see that Edith needed a lot of help to take care of her only child.

ASTT was formed in 1990 and in when we received funding we arranged music therapy sessions in south and Edith and Jervan and a few other families attended. (Among the group was Kareem, Rance, Gabrielle(now deceased),Steffon,—) The music sessions had started in north in 1998.

In 2004 after the TLSC opened in Point Fortin, and with help from ASTT Edith took Jervan to Point Fortin twice per week to attend music and life skills sessions. Gina Mohammed, our Vice President and Principal of the TLSC got to know them very well.

Edith was also part of ASTT’s executive and then in 2007 Mrs. Etheline Copeland (Gabrielle’s mother) formed the south support group and Edith became a member of that south committee. After Mrs. Copeland’s passing a different group was formed and Edith returned to ASTT.

She always supplied us with her delicious sweet breads, sandwiches and cakes. Gina recalls that she stopped baking black Christmas cake after she tasted Edith’s! She also spoiled Rance with fudge!

Edith was always smiling through her heartache brought on by persons in society who were callous and uncaring towards Jervan, her son with autism.

When her medical condition worsened and there was no one else to take care of Jervan, she reluctantly admitted Jervan to an institution as she could no longer keep him in her rented apartment. His behaviour would sometimes be violent and noisy.

It is very unfortunate that the Government Agencies do not allocate suitable group homes and residential care for persons with autism. Many of our families have no one to care for their child or adult with autism when they die. There is an urgent need for members of society-we Trinbagonians- to become advocates and ensure that Government and those in authority allocate the resources needed.

Families need access to suitable respite and residential care for individuals with autism. This is not available in T&T.

We are on the eve of April which is autism awareness month and I urge you all to get to know a family who has a child/adult with autism in your community.

Let us all unite to advocate for the needs of children and adults with autism.

I would now like to read the thoughts of some of Edith’s friends in ASTT:

Edith taught me courage in the face of adversity.  Even in illness she always attended functions with Jervan.  May she rest in peace.

Kari  Dunn Buron- She was such a brave person, struggling with so many things from her own health to the welfare of Jervan.  I got to know Edith best during my early visits to Point Fortin.  I was always so struck by her dedication to parenting and understanding Jervan.  She loved him and cared for him, even when his behaviour was confusing and even scary.  I ached for her when Jervan was moved to an institution – I know she felt a sense of failure, but I hope she understood that she did an amazing job of mothering a very complex child and adult.  Edith attended workshops and volunteered her time, even when she struggled with her medical issues.  She was a fighter and one of the good guys in life.  Jervan will miss Edith.  The autism community will miss Edith.

Jason Backes, OT,MN,USA- I did not get to know her too well but her love and dedication for her son was so evident to me.

Some stranger has to sigh in sadness

That another parent has left us

Someone has to speak of the sorrow

The Autistic Society feels that Edith has gone

Somebody has to tell of the tears that flood

The hearts of mothers, who mourn even while alive,

The inevitable separation from their children –

on the autism spectrum

Some soul mate has to tell of Edith’s heartbreak

That sunk her sadly to the grave

Somebody has to scream the sorrow of Jervan, her son –

His suffering strangled by lack of speech

Someone has to hope that somebody cares enough –

To be moved to swift action by these words,

Put societal amenities in place for eventualities like these!

Here’s hoping that the pen is truly mightier than the sword.

To end I ask you all to say special prayers for Jervan and ask God to continue to take care of him, one of God’s special children.—  May Edith Rest in Peace.