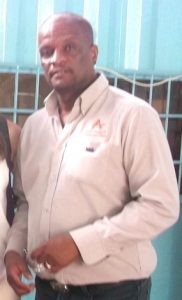 On behalf of the members of the executive and the families who met and worked with “Freddy” I wish to express our sadness on learning of his passing.

Freddy contributed to ASTT’s development and achieved much during his time with us.

While a volunteer in Cognitive Behavioural Therapy (CBT) at Autism Place he, and his wife, Toni achieved ASTT’s Advanced level training.

He was an executive member from 2013 until 2015 and before this he was involved as a volunteer facilitator at training workshops and camp activities. Freddy assisted ASTT in the delivery of the CREDI course on autism. He also presented papers on CBT and disability issues at UWI conferences as well as increased awareness of autism during radio and television interviews.

Some tributes from our volunteers:

Marilyn Moore, Canada – Freddy was my “Trini” linguistics instructor.  His smile was infectious.

Kari Dunn Buron, USA: I have very fond memories of Freddy.  I found him to be a good thinker with a big heart.  He supported Neurodiversity in education and in our society as a whole.  Freddy’s sense of humour was fun and engaging for the children he worked with and for all of us who considered him a colleague and friend.  He made the world a better place.  We truly have lost a good man.